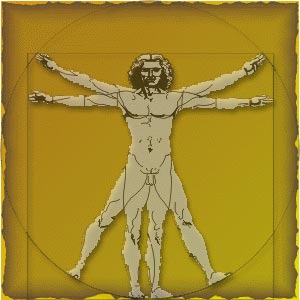 One the principal dietary offenders in the Standard American Diet (SAD) is the overconsumption of omega-6 fatty acids.  These are polyunsaturated fats (PUFA) found mostly in processed vegetable oils like corn oil and soybean oil. I have to give credit to physiologist Ray Peat for introducing me to the perils of omega 6 fatty acids and the overconsumption of polyunsaturated fats (PUFA) in general. Stephan Guyenet at the Whole Health Source blog also does an excellent job of revealing how the overconsumption of PUFA is most likely one of the key causes of overweight/obesity and the epidemic of disease in the US today too.

The problem is that the mainstream dogma persists that PUFA are somehow protective and saturated fats (SFA) are to blame for the metabolic conundrums that haunt western society. For example the American Heart Association continues to trumpet omega-6 fatty acids as heart protective (here). As an aside, one can really appreciate the integrity of the AHA's reccomendations when the Fats & Oils page has a huge sponsor ad from canolainfo.org, but I'll digress on that issue.

These reccomendations are generally alligned with the lipid hypothesis and the continuing incidence of researchers finding PUFA consumption decrease LDL, or what the mainstream will have us believe is the bad cholesterol (1). To take a step back, LDL is actually a lipoprotein which carries cholesterol, not cholesterol. This is an oversimplification made to increase the average citizens ability to understand cholesterol. An interesting note made by Gary Taubes in Good Calories Bad Calories is that LDL has been observed to be weak predictor or non predictor of coronary heart disease (CHD) in relevant populations. For example in one of the largest ongoing observational studies in the US, the Framingham study, LDL was not strongly associated with CHD (2).


Fortunately as the Framingham findings reveal, more and more literature continues to be published that supports that omega-6 are most likely not beneficial, are indeed problematic, and by no means an adjunt to good health and longevity.

A very recent systematic review published in the British Journal of Nutrition (3) by Christopher E. Ramsden and colleagues analyzed the relevant literature on omega-6 interventions, in which case previous researchers replaced SFA and transfatty acids (TFA) with omega-6, omega-3, or a combination of these two principle PUFAs (there are also omega 9's) and furthermore, measured outcomes. The researcher's findings revealed that the analyzed randomized controlled trials (RCTs) which substituted SFA and TFA with omega-6 without simultaneously increasing omega-3 produced in an increase in risk of death that approached statistical significance. Risk of non-fatal heart attack and CHD death was significantly higher in omega-6  PUFA diets compared to the mixed PUFA diets (P = 0·02).

One of the more famous trials in fatty acid mainupulation, the Finnish Mental Hospital study was excluded because subjects were assigned by hospital and not randomised as individual patients. Therefore the effect of the this intervention was measured on whoever happened to be in the hospitals during those periods.

Another popular trial, the Diet and Reinfardtion Trial (DART) was excluded from the analyses because data on the specific composition of omega-6 and omega-3 fatty acids was not made available by the DART researchers. All in all, I would say that the findings of the meta analysis support previous findings indicating that omega-6 may have deleterious effects, potentially by competing with the possible beneficial effects with omega-3 interventions (4). Although to be entirely honest, Chris Masterjohn has done a good deal of research revealing that omega-3 may not be as important to the diet as commonly portrayed (see here). However if you do want to incorporate good sources of omega-3 fatty, these would include grass fed animal products and wild caught fish.

Interestingly while looking through pubmed, I found a study published just earlier this month making the observation that the rs174537T  genotype (its all good if you dont know what genotypes are, keep reading) is associated with lowered arichidonic acid, a deriviative (by product) of linoleic acid, the most commonly found dietary omega-6 fatty acid in serum phospholipids and a reduced risk of CHD (5). This was found after adjustment for age, BMI, cigarette smoking, alcohol consumption, hypertension, diabetes mellitus, and hyperlipidemia (P=0.017). While I wouldn't call this one study alone definitive evidence that omega-6 is detrimental, it appears to be another tac in the coffin.

My own personal opinion is that this all makes perfect sense. Omega-6 fatty acids are typically found in seeds and grains. These foods are typically low in fat. Massive amounts of such foods would have to be consumed to meet the equivalent conumption seen in America today due to the concentraion of such fats in industrial oils such as corn oil and cotton seed oil. To be more clear, a one pound bag of frozen corn contains roughly 5 grams of fat while just one tablespoon of  corn oil contains 14 grams of fat (nutritiondata.com)  These industrial oils are also a very recent inclusion into the human diet. I have provided a graph below from USDA statistics on vegetable oil consumption. 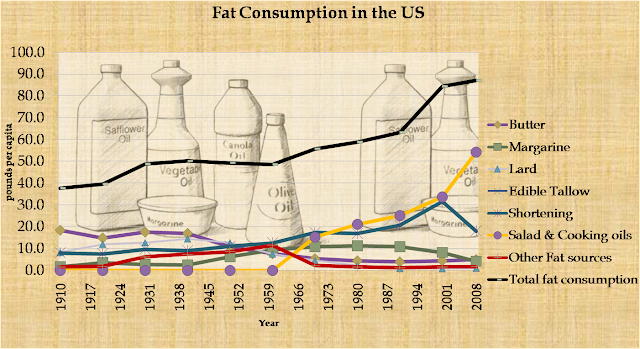 For those hard of sight, overall fat consumption is the black line which has risen over the year, but not as a proportion of Calories. The principle source of fat you will note is salad and cooking oils, not animal fats. The increase in such fats is not seen until the 1950's. The addition of such seems to associate pretty clearly with the obesity/overweight rise seen in the US. I think it's important to note that this has coincided with other confounders that may be triggering the state of unhealth witnessed in America. However notice the increase in overweight/obesity that aligns quite closely with the increase in industrial oils.

Fig. 2 Obesity/overweight data from the CDC, 2006
Obviously one can't infer direct causation here, but there is does appear to be a relation of some sort and as noted earlier, Stephen Guyent has wrote about this at the Whole Health Source blog as well, indicating a relationship between decreased thyroid activity and consumption of industrial oils. As noted, these oils are a recent additon to the diet and are found in mostly processed food, meaning  supraphysiologic (beyond normal) consumptiom is taking place. As Dobhanszky famously stated, "Nothing in biology makes sense except in light of evolution". This seems to apply here. We need to cutdown on the omega-6. Good alternatives include animal products from grass fed free range animals, coconut oil, olive oil, and nuts and seeds (not the ones roasted in vegetable oil), if you tolerate them.
Lastly, one might be curious as to why these dangerous oils are in processed foods and why the media says they are so good. Look no further than U.S. farm subsidies. Alot of the excess corn, cotton, and soybean is made into oil, cheap oil. It has to go some where.
Posted by Austin at 11:51 PM

Austin
I'm a grad student at the University of Illinois @ Chicago, studying Exercise physiology. Im also heavily interested in nutrition. I try using science, history, anthropology, and ethics to guide my nutritional & exercise practices. I have experience in personal training, athletic strength and conditioning, fitness instruction, as well as helping out with laboratory endeavors in the Kinesiology department at my school.

What am I reading?